Today, despite the sum total of everything that has happened to me so far in South Africa, as a naturalized South African, currently ongoing taxi strike included, not forgetting how I feel about them, I realized that I am proud to be South African. It’s not something I express openly because I know that at any time, I can be told that I am a foreigner and I don’t belong here. I know that I can easily be told that South Africa is not my country. I am easily intimidated.

When I was younger, I wanted to be a public servant. I dreamed of becoming an ambassador, promoting friendly relations between my country and other countries. Then I thought I wanted to run for a government office to help the citizens of my country. I grew up. Apart from realizing that politicians and government officials are not the kind of people that I am, and accepting my limitations that I cannot change them by being me, I gave up on my dream. I decided that it was just too difficult. I cannot change the world. I can’t even change my mood sometimes.

Last week, I had a nervous breakdown partially because of my failure to handle the road nightmares I experience daily. The stress in my life initially gave me hypertension. My body told me to take it slow. With the road works and constructions in my area, things got worse and my mental health with a history of being fragile in the past has been affected, too. Not only must I take hypertension medication daily, I now have to help my brain re-wire by taking medication that everyone in my life say I should not take. 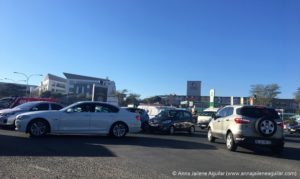 To say that I despise the combi taxis isn’t an overstatement. My negative emotions towards them have grown much stronger in the last month or so that I have become brave, defiant even. While all road users allow themselves to be bullied by the taxis, I take them on. I do not let them cut me on the road. It infuriates me when they cut in front of me only to drive slowly and I am stuck behind them. When they do something against the law, I courageously hoot (for the Americans: the hooter in the car is the horn) at them. Obviously, they would hoot back at me. Sometimes, they would even shout at me, profanity not exempted. Silently, I pray that I drive fast enough so they can’t catch me and that the traffic light will be green for me and red for them. Not that the red light actually stops them.

So, I have embarked on writing a series on my road rage, mainly involving these loathsome combi taxis. I published (online – here and on my other blog) the first story. I have the next one almost complete. In my head are the next stories. I will probably write them but I suspect that there will be a couple that will not follow the emotion of the first one.

Yes, strangely, I find myself confused. Today, I have uncertainty in my heart. I would like to hate them because of their tendency to be violent. It is but expected, right? No one has a right to intimidate other citizens. No one should resort to shooting or killing “just like that”. It is almost the same as how I feel about my employer. There are reasons to dislike them but then something happens and a different view is presented. I am suddenly standing face to face with the unfamiliar. I’m looking at it from a different perspective. I understand them. I feel compassion. Not for the violence. Not for the lawlessness. Not for the rudeness. Not for inciting fear. I start to get a glimpse of what causes these negative actions. I understand that there is no reason to resort to “being bad” but behind what we see, I suspect that there are giant corporations instigating the chaos as they go about their business making a hell of a lot of money from all of us who already don’t have much. They sit silently behind the scenes and we all argue and get angry with each other.

I find myself in hopelessness as I wonder if things are ever going to change in the world.

Or perhaps we need the second flood.